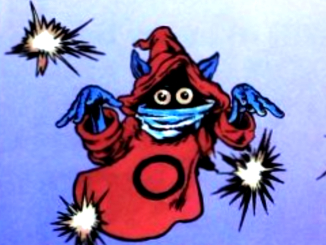 TRN Time Machine is traveling back to 1985 in this episode to flip through an issue of He-Man and the Masters of the Universe Magazine! Mickey and Jason will describe their way through the pages including the He-man Mailbox, Orko’s Earth Report (pop culture news), the He-Man of the Issue, Advertisements, and more. Jason also gives the backstory of the publisher of the magazine to setup the show. Scans of the pages are also included below from the Internet Archive.

Also, join us for After Hours on Patreon every Tuesday night! This week, Mickey plays the This or That game with Jason and makes him decide between two retro things. Jason also tells about his Chicken McGriddles with bacon experience and his review of Pepsi Mango. Mickey breaks down the retro content on the Roku channel. Patreon VIPs at the $5 level unlock everything including After Hours and access to the VIP Vault containing the complete TRN Time Machine audio library and exclusive podcasts.

Listen to our He-Man and the Masters of the Universe Magazine episode below and join us later tonight on Patreon and the VIP Vault for After Hours. 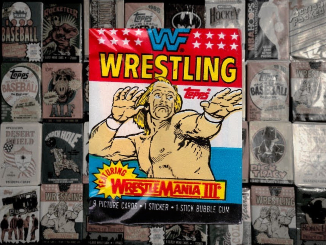 This is Wrestlemania week, and I’ve been feeling awfully nostalgic for old pro wrestling. Because of that, you got the post earlier this week on the old pro wrestling action figure lines. So to keep the ball rolling, here is an older episode of Wax Pack Flashback that I do for The Retro Network on TRNTV. Give it a watch and check out how awesome these cards were.

It’s always fun to open an old pack of cards, but these were even better than normal because they featured so many of my heroes growing up. Every card in the pack brought back it’s own old memories. I need to find more of these packs and see what other treasures I can find lurking inside.

If you enjoyed seeing this old pack of cards get opened, check out some of the other packs I’ve opened… 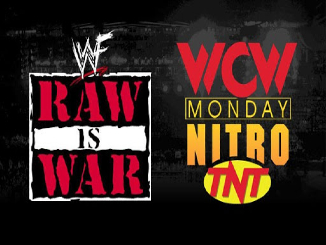 In honor of Wrestlemania week, the Time Machine Podcast is traveling back to the mid ’90s in this episode to relive the heated Monday Night Wars of pro wrestling! Mickey and Jason come up with five moments each that defined the era of factions, surprises, and packed arenas. Included are some unique venues for WCW Nitro, comedic moments on WWF Raw, and a couple of electrifying crowds that cheered wrestling’s biggest icons of the time.

Also, join us for After Hours on Patreon every Tuesday night! This week, Jason and Mickey continue the wrestling theme with Mickey’s thoughts on the WWE Network moving to Peacock and a couple bad gimmick wrestlers. Jason also shares his first experience with the Breakfast Baconator at Wendy’s and his anticipation for Retro Con 2021.

Listen to our Monday Night Wars episode below and join us later tonight on Patreon and the VIP Vault for After Hours.

Support The Retro Network on Patreon at the $5 VIP level and get the unfiltered After Hours show every Tuesday night, access to our VIP Vault audio library, an invite to join the VIP Lounge retro community on Slack, and bonus videos and articles. You can also choose the $2 VIP level to join the VIP Lounge or the $1 Fan Level gets our thanks and a shout-out on an upcoming episode.

Subscribe to TRN Time Machine and interact with us on social media @TRNsocial on Twitter, Facebook and Instagram. Contact the hosts directly on Twitter, @RD80s for Jason and @Yesterdayville for Mickey. Would love to hear your thoughts on this episode and any future destinations you want TRN Time Machine to travel! 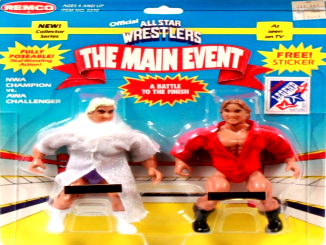 Even though I don’t keep up with modern wrestling, I always know the date of Wrestlemania. And as it gets close every year, I get really nostalgic for old pro wrestling and everything that goes along with it. And not much went more hand in hand with wrestling on TV than wrestling action figures. Let’s look at some of my favorite wrestling figure lines from the past!

To begin with, I’ve got to start where it kind of began for a lot of people…WWF Superstars figures from LJN!  This was the wrestling action figure line that most folks would say was their first.  It kind of was for me, but I never had a truly great experience with it.  I first saw them when a neighbor kid at my grandmother’s house brought over his Hulk Hogan, Big John Studd, and Andre the Giant figures.  I was mesmerized.  I told my Mom about them, and that I wanted some.  For Christmas, I got a Nikolai Volkoff figure, and a Mean Gene Okerlund.  Now I love Mean Gene, but what the hell was I going to do with his figure?  Have him interview Volkoff over and over again?  This was not a good start.  A while later, I got a Junkyard Dog figure, but by then, the bloom was off the rose for me as far as these figures went.  In the meantime, I had played with them a couple of times at my cousin Tim’s house.  He had the ring to go with the figures, so it was really cool.  I still love these figures, but I never owned enough of them myself to put it really high on my all-time list of favorite toys.

Sticking with the WWF, these Thumb Wrestlers were my consolation to not having the LJN figures.  I was actually able to pick up several packs of these with my weekly allowance, and that gave me enough variety to really enjoy having these.  I had Hulk Hogan, JYD, Hillbilly Jim, Iron Sheik, Nikolai Volkoff, and Big John Studd.  Like I said, enough variety to play around with and have some matches.

Now, these things weren’t great as what they were designed to be.  They were too cumbersome to put on your thumb and have actual thumb-wrestling matches.  I tried taking them to school to do that very thing with but failed miserably.  They were great for just playing with and having them do moves to each other with though.

END_OF_DOCUMENT_TOKEN_TO_BE_REPLACED 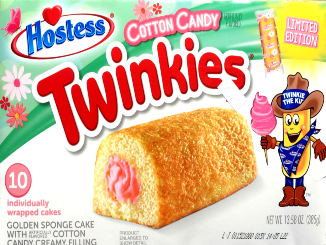 You know how much I love to talk about old food. The ones we loved that eventually disappeared, so all we’re left with are the memories. Well, we couldn’t think back on them fondly if we never tried them in the first place. That’s why I try so much new junk food when I see it on the shelves today. Which leads me to this special treat.

Hostess’s latest variation on the iconic Twinkie is a new cotton candy flavor. The package suggests that it’s a “golden sponge cake with artificially flavored cotton candy creamy filling”, but I tell ya, these things don’t taste artificial. The cream tastes just like actual cotton candy. They even smell like cotton candy!

I always approach new Twinkies flavors with a bit of trepidation because most I’ve tried have not lived up to the high expectations that come with the name “Twinkie”. But these blew me away. The golden sponge cake is still just as spongy and delectable as always, which you don’t always get with the flavor variations. I’m looking at you Chocolate Peanut Butter Twinkies.

I can’t get over just how much the cream tastes like actual cotton candy. It even leaves a very pleasant aftertaste. But the cotton candy flavor isn’t so overpowering as to be overly sweet either. It’s the correct balance of subtle and hit the nail on the head flavor. It is really good at being what it’s supposed to be, and that golden sponge cake always hits the right spot.

So after eating three or four of these things in a row, I feel like I have a really good handle on them, and give them a pretty solid rating of A+.

Since these are limited edition, and I got my hands on them late in the season, you’d better be finding them soon if you want to try them. Don’t worry, they’re worth the money. 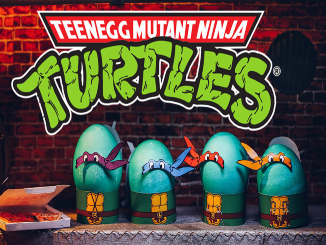 Here’s this week’s collection of nostalgia-themed articles and stories from around the web for you to relax with this weekend. Grab yourself a snack, settle into your favorite comfy spot, and enjoy these stories.

When Fonzie Jumped the Shark on Happy Days (via Mental Floss)

The Story Behind 1990’s Movie Theater Carpets (via Neatorama)

Ring Raiders: Crashing on Take-Off (via The Retro Network)

5 Awesome Things on eBay This Week (via Plaid Stallions)