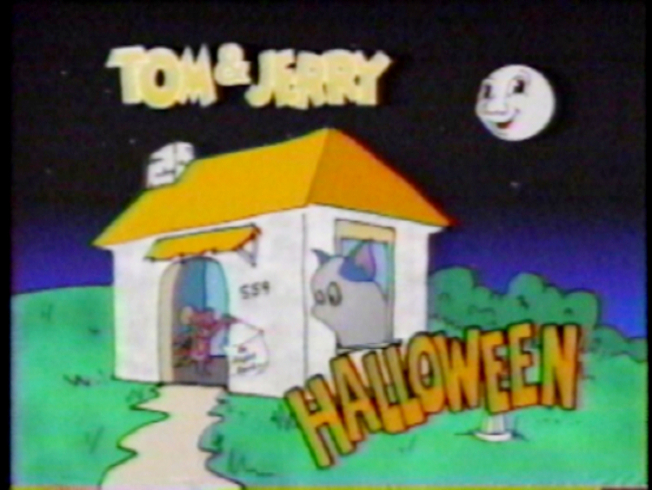 On an old episode of The Retro Network Podcast, Tony Grate and I discussed some of our favorite Halloween specials from through the years, and one of my favorites was always the Tom & Jerry’s TBS Funhouse Halloween Special.  Back in the late ’80s, Ted Turner and TBS launched Tom & Jerry’s TBS Funhouse.  It was an hour and a half cartoon block every morning and afternoon where they combined Tom & Jerry shorts with Looney Tunes, Merrie Melodies, shorts from the Droopy library, and Popeye cartoons.  It was a really fun block with great variety.  During the holiday seasons, they kicked it up a notch and put together specials for Halloween, Thanksgiving, and Christmas.

These specials would usually air several times in the weeks leading up to the holiday, and they selected appropriate shorts to fit the theme.  Mixed in with the cartoon shorts were live-action bumpers filmed with Josh Jarboe and Audra Lee of the TBS show, Kid’s Beat.  They would dress up and tell jokes or give history about the holiday featured in the special.

In 1987, we got the first Halloween Special.  I didn’t have cable at the time, but my grandparents did, and rarely did they ever change the dial from TBS.  So when I was there visiting, I was treated to NWA Wrestling, episodes of Andy Griffith, and Tom and Jerry’s Funhouse.  I was lucky enough to be there one time and catch a commercial for the coming Halloween Special.  I got pretty excited about it, and my Mom actually took me back to their house when the special was on so I could watch it.

I remember being ecstatic about it, and really enjoying it, as it was a special filled with just Halloween shorts.  A year later when we had cable at our house, I was super excited when I saw a commercial on TBS advertising the special once again for the 1988 Halloween season!  I couldn’t believe it.  I was going to get to watch it again.  Not only did I watch it again that year, but I watched it every year it was on going forward. Heck, I’d still watch it every year these days if it were still on TBS.

Unfortunately, 1992 was the last year these specials saw the light of day.  And in another unfortunate event, I’ve not been able to find the full special anywhere online to watch.  But, a fantastic user over on YouTube has a video that features the intro, all the live-action bumpers, and commercials from the special.

And if you had any interest in trying to recreate the special, here is the list of shorts that were featured:

I wish kids today had the opportunity to experience the anticipation of events like this.  Something that you just can’t get instantly, and that you have to wait for.  Things that are special for, and unique to the season.  There is just a certain feeling that can only be achieved by waiting for it, and old specials like this are one of those things.