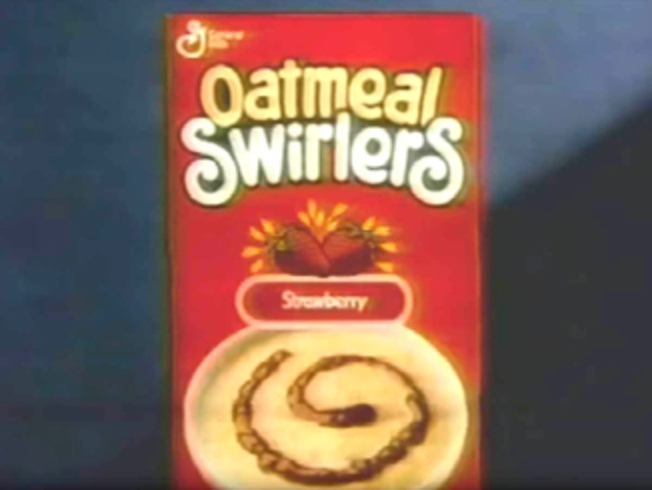 While I don’t even faintly remember how it tasted, I do remember how much fun breakfast was on those mornings. I can remember almost being excited about going to bed on those nights when I knew that Oatmeal Swirlers was going to be for breakfast the next day. Sadly, like so many other favorite foods of my youth, this one bit the dust far too early. For a long time after it vanished from the shelves, I missed it terribly. Time went on and other breakfast novelties came along to take its place, but it certainly left its mark on me as to this day I wish I could pick up another box of this stuff and share it with the kiddos.

Now, some people will tell you that you can duplicate the magic yourself using various kinds of oatmeal and jellies. But I disagree. The magic was how it all came together. The low-quality oatmeal, and the over sweet “jelly” in its plastic pouch, and the simple, yet beautiful design of the box. You can’t replicate shit like that. I’m not even going to try.

There’s not a lot of info out there on the interweb about Oatmeal Swirlers, but here are some writings from other people that remember it, along with the images and videos I’ve found to make you salivate for the glory that was Oatmeal Swirlers. Check them all out.

Food From the Crypt: Oatmeal Swirlers – We Miss the 80s
The Best Part of a Complete Breakfast – Cove of Solitude
Old Junk Food, Revisited – Dinosaur Dracula

3 thoughts to “Oatmeal Swirlers of the ’80s”