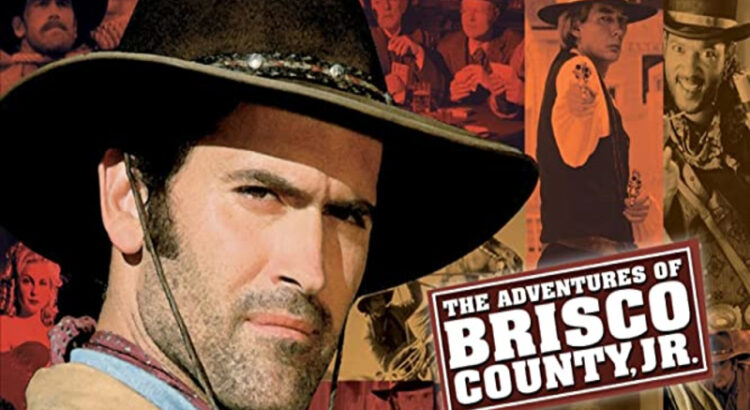 This well-liked but short-lived Fox TV series was a sort of modern-day take on The Wild Wild West. Bruce Campbell (known to horror fans as ‘Ash’ in the Evil Dead film series) played the title character, a Harvard-educated lawyer turned bounty hunter. Brisco took on this profession when his father was murdered by John Bly and the ‘Gang of 12.’

To seek his revenge, Brisco worked for the Westerfield Club, a group of robber barons who hired him to round up the rogues responsible for his father’s death out of fear that they might be next. Brisco’s liaison with the club was their legal counselor Socrates Poole, who often played an unwilling role in Brisco’s adventures. The avenging son was also aided in his quest by Lord Bowler, another bounty hunter who helped Brisco on his hunt for the purpose of being cut in on the many bounties involved.

Along the way, Brisco discovered that main bad guy Bly was obsessed with obtaining “the Orbs,” spherical objects created by aliens that gave their owners mystical powers. However, these objects could do terrible things in the hands of the wrong people, giving Brisco a secondary mission: trying to keep Bly from obtaining the Orbs. This subplot was emblematic of the show’s love of including paranormal phenomena in the story. For instance, Brisco’s horse Comet could talk and thought it was a person. Also, individual episodes regularly included such offbeat elements as time travel and UFO’s.

Other regular characters on the show included professor and inventor Albert Wickwire and saloon singer Dixie Cousins. Dixie functioned as Brisco’s love interest but was no weak sister. She could be as tough-minded and clever as any man in the cast, part of the show’s general policy of presenting women as strong characters. The show also regularly featured guest villains and new peripheral characters to enhance its colorful nature. A favorite among the show’s fans were the down-and-dirty Swill brothers, a quartet of inbred roughnecks who posed a memorable challenge to Brisco in the episode “No Man’s Land.”

The Adventures of Brisco County, Jr. was created by Jeffrey Boam and Carlton Cuse. Boam was a screenwriter who worked on the Lethal Weapon films, while Cuse had been a regular writer for the acclaimed drama Crime Story. This high pedigree guaranteed the kind of taut pacing and clever, colorful writing that earned the show an instant cult following.

Sadly, Brisco County Jr. was never able to cross over to a large audience (some claim this was due to its deadly ‘Friday at 8 p.m.’ time slot) and was canceled in May of 1994 after 27 episodes. However, it is still watched today by its fans via reruns, keeping the quirky sci-fi Western adventures coming.