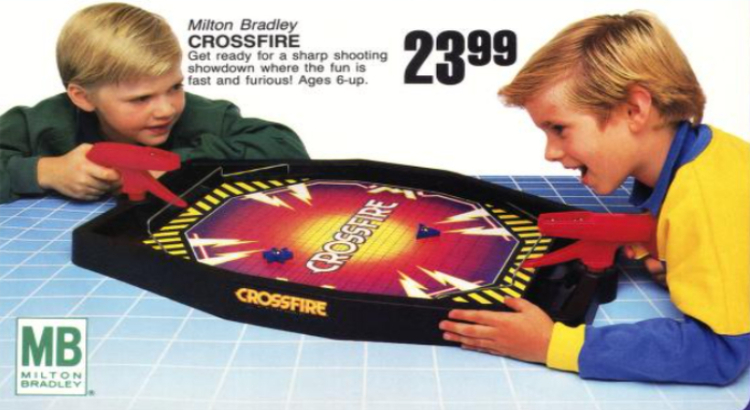 On this week’s episode of The Retro Network Podcast, Jason and I scoured through an old Toys ‘R’ Us sale paper from 1988. Even at just sixteen pages, the thing was loaded with all kinds of cool toys from the past. You can listen to us salivate over everything in the ad on the show, but here are five things from it that I want to highlight.

Until we recorded the show, I was completely unaware of the existence of these incredible looking toys. They’re kind of like Transformers in that they’re two distinct toys in one. Like the M-16…you could play with it as a machine gun while running around chasing the neighbor kids, but you could also open it up into a playset for the Combat Troops.

Not to mention the combat troops themselves which you would obviously need to ramp up the fun with the playsets. And for just $3.99 you got ten good guys and ten bad guys to battle it out. This is a line I’m going to have to look into further.

Way back when, well I guess in 1988 as it turns out, I saw commercials for what I thought were pretty cool looking toys. I never ended up having any of them, and they gradually slipped from my mind until just a few years ago. I searched high and low for a name for the toy line with no luck. Then I did what I should have done in the first place. I turned to Twitter for the answer and got it pretty quickly. Bone Age.

I had been enamoured with the “vehicles” and the like from the line, and still am today. So when we flipped the page in the sale paper and happened upon these things, I was ecstatic. These aren’t even the best representations of the toys in the line. It wouldn’t fit this post if I started adding in images from other sources, so you’ll just have to google them yourselves.

But the gist is that you’ve got these big skeleton dinosaurs and the cave men that ride on them I guess. But some of the other toys in the line are net launchers and other such fancy weapons. Maybe the coolest thing about them were that you got to put the dinosaur skeletons together before you played with them, adding another layer of fun to the toy.