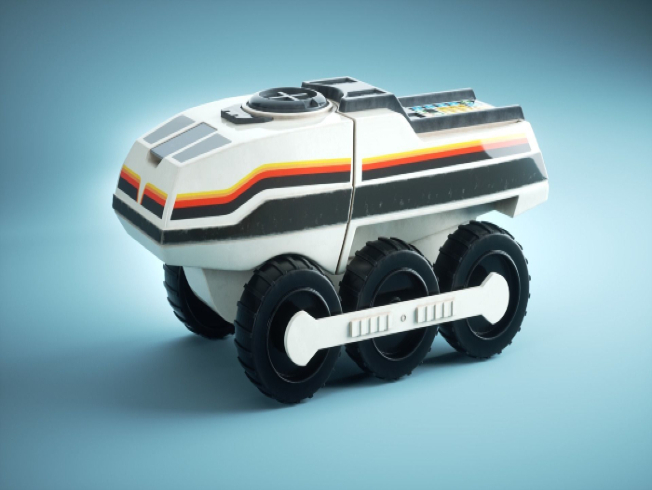 November of 1979 was the moment the future finally arrived in the American living room. When the holidays arrived a month later, many American children (mostly boys) were treated to the toy of their dreams, lovingly realized in injection mold plastic and the invisible world of internal chip technology.

Imagine the revelatory shock that spread like miniature mushroom clouds of excitement through your nervous system when underneath the torn wrapping of a holiday gift lay a bright, shining box containing Big Trak, the first artificial intelligence robotic vehicle made expressly for children. The mind raced with evil genius delusions of grandeur, fantasizing about all the limitless applications of your new six wheeled, programmable domestic assault vehicle.

Big Trak, the brainchild of an electronically minded Milton Bradley Company (who released Simon and Microvision during the same period), looked like a toy version of the futuristic armored RV from Damnation Alley. The squat, low and sturdy appearance of the truck had an almost militaristic feel, which was heartily reinforced by Big Trak’s ability to fire “Photon” lasers (actually a focused high wattage light bulb behind a red filter). The toy retailed for about $43.00, a price high enough that it was often marooned it to the envious land of “toys other people have in their homes.” Big Trak also had one “trailer hitch” accessory that, for anyone who saw Big Trak commercials, was an absolutely necessary purchase. The trailer sold for $12.00 and could be used to haul cool stuff around the house. In the commercial, a kid giddily programs his Big Trak to surprise his father with a cool, refreshing drink, perhaps thanking him for spending so much on this techno-wonder.

In the end, remotely serving your father his evening gin & tonic was about the limit of Big Trak’s practical applications. The plastic multi-colored numeric directional keypad located on Big Trak’s back was just complicated enough to make navigating the hallways and rooms of the average family home a daunting task at best. There was a difficult system of pressing numbers and arrows in sequence in order to command the vehicle to “go forward,” “turn left,” “go forward again,” “fire photon,” “retreat,” etc. This was made more problematic by the fact that each time the forward arrow was pressed in the sequence of commands, the Big Trak would move approximately 13 inches. This was not a particularly helpful formula for precise driving, and a lot of living room furniture suffered as a result.

Even if Big Trak was eventually proven ineffective as a toy, its lure and appeal were supreme. While the electronic aspects were particularly hypnotic, the idea that Big Trak offered an element of control to a child that had very little power over the world around them was like entering the realm of magic. A child’s environment is often dominated by schedules, rules and parameters designed by someone else’s hand. Big Trak promised a child his own agency in decision-making. Move here. Turn there. Fire weapon. Bring me a drink. Obey me, Big Trak, for I am your god.

For a brief, ecstatic moment, the future had finally arrived, even if it was eventually relegated to the back of a suburban closet stuffed behind clothing two sizes too small and boxes of forgotten baseball cards. Check those closets, and you just might find a dusty, broken down Big Trak.

One thought to “Big Trak”