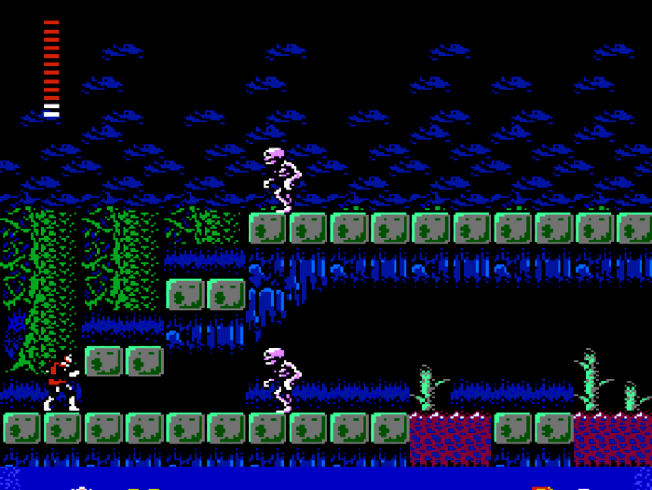 When Konami unleashed the first Castlevania cartridge on the Nintendo world in 1987, I was still too wrapped up in Super Mario Bros., Excite Bike, and Pro Wrestling to pay much attention.  Even though the original game was much loved and had a lot of hype around it, I was still impervious to the franchise’s existence when Castlevania 2:  Simon’s Quest rolled out in 1988.

Now I don’t know how much advertising was put into this game, so I’m not quite sure what attracted me to it in the first place.  All I know is, that one Saturday afternoon I took all the money I had saved up to the local K-Mart when my Mom went to do her usual shopping.  I went straight to the electronics section and starting scanning the available Nintendo games, as I was intent on picking one up that day.  Maybe it was the only game they had, or maybe the box art just got to me.  But little did I know, that I was purchasing one of my all-time favorite games for the Nintendo system.  Matter of fact, when I bought a Wii for the kids when they came out, I immediately downloaded Simon’s Quest for it and played it right up until the system got out dated and the kids moved on to something else.

In Castlevania 2:  Simon’s Quest, you take the role of Simon Belmont on a journey to undo the curse placed on him and his family by Dracula at the end of the original Castlevania game.

The quest of Simon to destroy Dracula was the simple premise, but the much more complicated facet of the game was just where in the heck did you find Dracula, and what weapon do you use on him when you find him? You spent your time traveling through towns, forests, and mansions killing skeletons, wolfmen, sea creatures, and everything else that got in your way, including spiders and floating eyeballs.

You earned “hearts” that were like money and you used that money to upgrade your whip and buy additional weapons like Holy Water, Laurel Bushes, Diamonds, and numerous other curiosities. You also had to talk to the townspeople to get clues on which direction to go to find Dracula and how to beat him. All this wrapped into the game made it one heck of a time-waster, and I can’t forget the Saturday afternoon that I finally beat the damn thing.

Castlevania II was the first role-playing game that I can ever remember playing, and even to this day, role-playing games are not my cup of tea.  But Simon’s Quest has stood the test of time and holds a special place in my heart as one of the best, and most fun video games I ever put my hands on.

Castlevania 2:  Simon’s Quest is readily available on the numerous Nintendo emulator and ROM sites you find on the web.  If you never played it back in the day, I highly suggest you give it a shot on some rainy Saturday afternoon and see what you think.